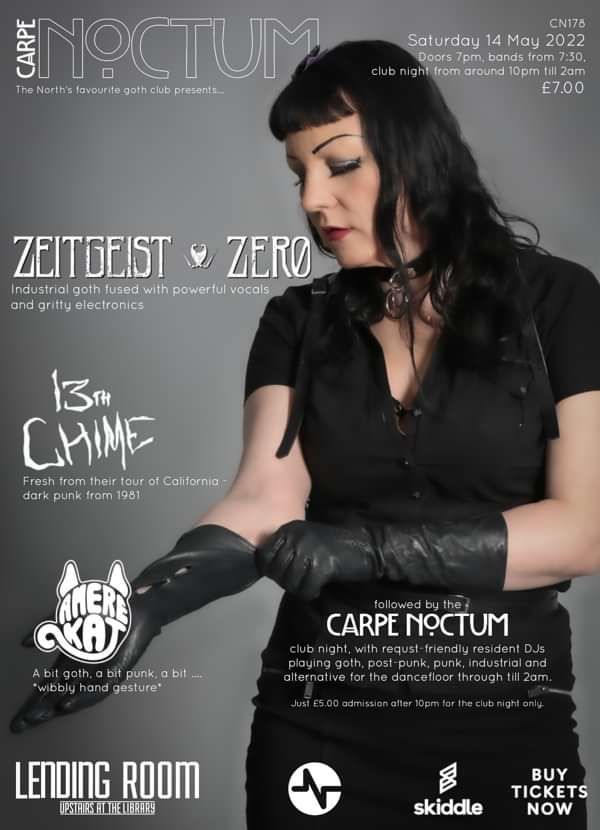 ZEITGEIST ZERO: industrial goth fused with powerful vocals and gritty electronics! https://www.facebook.com/ZeitgeistZero 13th CHIME: dark punk from 1981! https://www.facebook.com/13thChimeOfficial AMEREKAT parachutes in, ukulele in hand, to open proceedings in their much-overdue Carpe debut. A bit goth, a bit punk, a bit wibbly hand gesture .... https://www.facebook.com/ItsAMereKat CARPE NOCTUM: the biggest and longest-running regular goth club in the north of England. Our resident DJs HGV and Misrule boast a wealth of experience, with residencies at illustrious Leeds club nights such as Flock and Black Lodge under their belts, alongside guest appearances at clubs and festivals throughout the North, including repeat appearances at Goth City Festival and Infest. Weaving sets from a broad palette of dark alternative genres and subgenres, fuelling and fuelled by the dancefloor, their ethos is that the party is all! Expect tracks old and new, bona-fide classics and hidden gems, foot-stompers and lightbulb-changers. https://www.facebook.com/Goth.Up.North/ THE LENDING ROOM: Leeds' finest big small venue! With state-of-the-art lighting, PA and engineers, you can get up-close-and-personal with some of the best acts around today, and still sidle back to the bar in short order. Please note the Lending Room is an upstairs venue with no level access. https://www.facebook.com/libraryvenue/ 18+ only, right of admission reserved. Bands from 19:30 till approximately 22:00, with the club night following till 2am. Admission is just £7 advance/OTD, or just a fiver OTD from around 10pm for the club night only.

Zeitgeist Zero is an independent Leeds based band that has toured throughout the UK and Europe. Their sound is a combination of heavy guitars and industrial electronics and their unique music and dark style have received favourable press coverage, including BBC Radio 6, Sonic Seducer and Devolution. The band has built up a loyal following leading to festival appearances at Wave Gotik Treffen, Infest and Whitby Goth Weekend.

The band has worked with top music producers Steve Whitfield (The Cure), John Fryer (NIN) and John Rivers (The Specials). Their three albums and EP have met with international critical acclaim. ‘Dead To The World’ and ‘The Blackout’ were both voted “Album of the Month” by popular German music magazine Dark Spy. Their latest album Ghosts of Victory was mixed by legendary producer Steve Whitfield (The Cure). Zeitgeist Zero were recently invited to play alongside Peter Hook and The Light at Infest Festival’s 20th anniversary on their Best Of British night and headlined Goth City Festival in 2021.

In 2022 the band are planning to release their 4th album along with several video singles and are currently planning a UK tour. 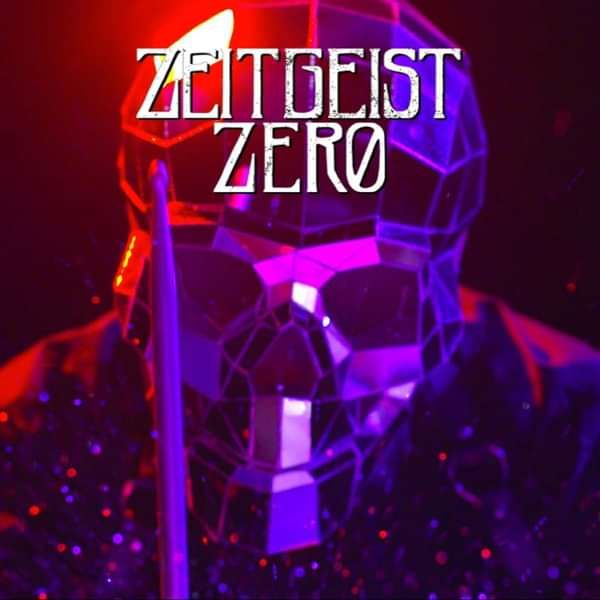